Now that we’re deep into the current financial bust that includes housing, all-cash buyers are snatching up homes at one-third their prior cost. Worse, higher loan requirements during the recession prevent many people who would otherwise take out a mortgage from buying the cheap homes. These loan requirements are indirectly set by Federal Reserve.

A major barrier for first-time home-buyers is tighter lending standards adopted since the housing bubble burst. These have made mortgage loans tougher to acquire. Banks are also requiring buyers put down a larger down payment. During the housing boom, buyers could purchase a home with little or no money down. Read more at the Washington Examiner

Who has the cash to buy homes? Maybe people who knew a crash was coming. Since Federal Reserve controls the quantity of money, it manipulates the economy and can cause booms or busts. This power could be used  intentionally to cause booms and busts in order to sell at the height of the boom, and buy back everything during the bust–if you have cash.

It’s a myth that Federal Reserve prevents booms and busts. Since Congress created the monopoly bank in 1913, Federal Reserve has caused, through ignorance or by intention, the all the crashes listed below:

A crash, bust, depression, and recession can only occur if there is a preceding boom, which is also caused by Federal Reserve. Unrelenting issuing of more dollars fueled the fake roaring 1920s. Before the crash, many people sold at the top of the market, then after the crash bought up companies and assets at 1/3 the cost. Sound familiar? Search through this web page about how Churchill and John Raskob of Dupont sold their stock before the crash.

Some people, like myself, always keep part of a portfolio in cash precisely for buying up goods during downturns. You can do this easily by investing in the mutual fund called Permanent Portfolio or by manually maintaining the following portfolio:

Whether Federal Reserve, acting on behalf of bankers and presidents and politicians, chooses to inflate, deflate, or whatever, one of those quadrants will rise, and when one gets to 35 percent of your portfolio, re-balance to lock in your earnings. 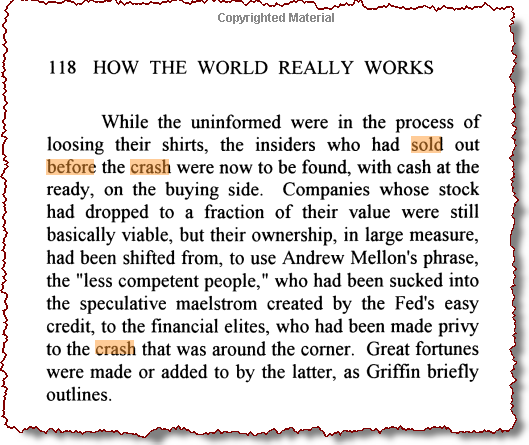