Just in time for July 4th stories about rising U.S. gas prices, I created a graphic showing that gas prices may have risen when measured in dollars and even Venezuelan bolivars, but gas prices have fallen when measured in wheat and coffee, since 2004. If you were lucky enough to have inherited wheat futures instead of dollars back in 2004, you would be better off when buying gas today. The 500% price rise when measured in bolivars shows that rising prices may in fact mean the value of the currency is falling. The dollar price rise was about 100% and not so coincidentally the quantity of U.S. dollars has risen 115% during the same time frame. Try our gas price calculator to change the years. 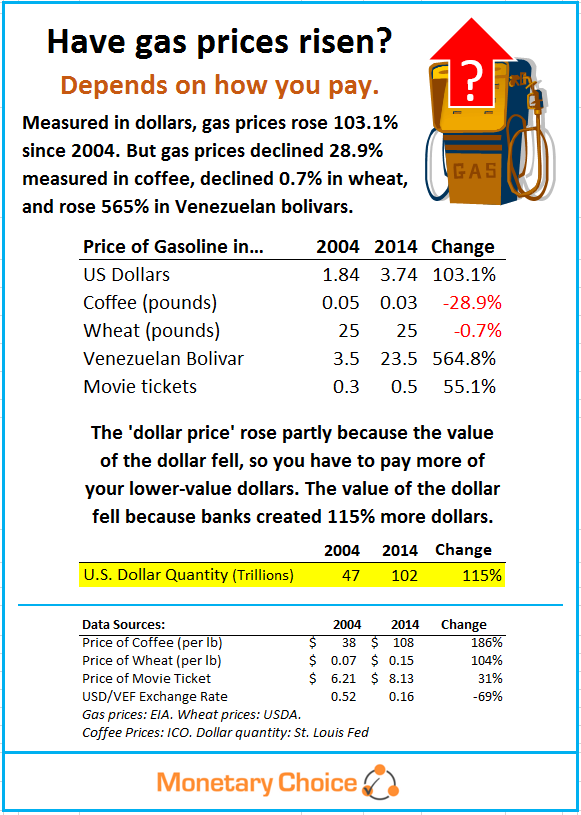 The solution is to allow people to choose their money since money/products can lose, retain, or gain value.

British authorities have warned the people of Scotland that if they vote for independence from the UK, they cannot use the British pound. There will not be a currency union that includes Scotland. This is great news.

If the Scottish really want independence, then they must free themselves from the banking chains of the Bank of England. The British pound, like all central bank currencies is used to extract wealth from anyone who holds the money. This is done by issuing more money, also known as inflation.

Just picture a table with ten glasses of water. Creating new money is the equivalent of adding ten more empty glasses to the table, then distributing the water from the first ten glasses amongst the twenty glasses. The original ten glasses will have fifty percent less water. The new ten glasses get water for free!

It is the British bankers who would suffer if the Scots stopped using the pound because that would be five million less people the bankers could steal from. Five million fewer glasses of water to pour from. The warnings from the UK treasury chief echo the words of the slave plantation owner who advised his slaves not to seek freedom. It is the slave owner who would suffer, not the slaves.

Long ago, the British pound sterling stopped being a pound of sterling silver, yet comically they still call it the pound sterling. The pound is now just a bunch of digits issued by the monopoly central bank and those digits are devalued each year. The longer you hold the pound, the more value they steal from you. You might still have the same number of pounds, but they are worth a lot less.

Here’s what the Scots need to do: allow people to use anything they want as money. Yes, this is independence–for each individual. Forget about a gold standard, let people choose their own standard, just as they choose their investments. Trade would still happen with money substitutes such as paper and charge cards.

The Scots must also remove extra taxation that applies currently when people use a product, instead of paper money, to buy another product. If I buy a movie ticket with a voucher for three gallons of gas, the government applies taxes the ticket and the gas. Whereas if I use the pound, only the movie ticket is taxed.

The British pound might be the worst thing about being in the UK. It’s through inflation (monetary confiscation) that the UK, the US, and many other deficit companies, I mean countries, stay afloat. We should be thankful the British want to stop the Scots from using the pound.

Money is simple. It’s the bankers who complicate the issue so they can use the money to take your wealth. What’s the longest running theatre in London? ……. The Bank of England.

A related article points out that Scotland, like any country, can still use the British pound, as Panama uses the Federal Reserve “dollar.” The UK officials are really saying the Bank of England won’t bail out their banks. This is more good news since a mis-managed bank should fail and bail outs are done with newly created “pounds” that steal value from all existing currency.

Bloomberg BusinessWeek reports that the iPhone 5S Gold is accepted as payment by people around the world. The actual phone is the payment, not some digital bits on the phone. A recipient then either uses the phone as a personal phone or sells the phone at the higher local price. This usually happens with phones bought in the US and sold elsewhere.

Within a couple days of my return, I exchanged both phones for domestic work, valuing them at the $815 I’d paid. The second phone’s recipient sold hers for its local value ($1,130) to an acquaintance, she said, with payments to be made over time. She told me the new owner sold the phone at an additional markup on an installment plan that will cost the final buyer about $1,350.

This illustrates that money is anything that people believe has value and can be traded easily to another person. iPhones have some good money characteristics: high value relative to its weight; the same worldwide; and widely known. Some downsides: can’t be divided into smaller pieces and loses value as new models appear.

Japan and China announced they will start using their own currencies for trade, decreasing their use of Federal Reserve dollars. This will reduce the demand for dollars and reduce its value.

Here’s my response to a journalist writing about Iceland adopting the Canadian currency:

Aluminum would be better as money than digits or pieces of paper. Fundamentally, money is a popular PRODUCT used as a medium of trade. It’s a PRODUCT with a primary use in society, and for that reason people accept it since they know others want it. No one uses digits or paper as a necklace for a night on the town, but they do use gold, and they use aluminum for many applications. Aluminum was never chosen as money because it’s quite heavy compared to its value.

The loonie and other national currencies such as the krona, pound, euro, us dollar, etc. are all worthless digits and paper forced upon the people by governments that use these fiat monies to tax people, by creating more of the digits, which steal value from all existing digits. Governments vary in how much they tax their subjects and Canada’s ruling party has been kinder than others.

Moving to the loonie from the krona would be a step up, though still a step in purgatory. A step into honesty would be moving to a product and if aluminum is the only option, so be it. People will use credit cards and electronic transfers to trade aluminum, making weight a non-issue in these times.

Here’s the column about moving to the Canadian currency.

Food Time Line provides some food prices dating back to 1600. The more recent history shows Kellogg’s Corn Flakes cost 19 cents in 1955 and 379 cents in 2011, 20x as much. Since the cereal has not become more 20x more popular, and since it’s easier to produce corn now versus 50 years ago, the price change must be due to falling value of the money.

To frame the price change another way, 19 cents was worth 1.0 box of corn flakes in 1955 and now is worth 0.05 box of corn flakes, a 95 percent fall. If you inherited stock that lost 95 percent of its value, you would sell it. You can sell your cents (and dollars) as well. Convert them into another product, which will be your new “money” for savings, and when you need to buy some Corn Flakes or really a month or more of groceries, convert your money back into dollars and cents.

For example, if you converted 19 cents into corn “futures” (a modern-day financial product) or silver or gold, your corn futures would likely be worth about 379 cents, and you could still buy one box of cereal.

Zimbabwe currently does not have a national currency.

Zimbabwe currently does not have a national currency!

Zimbabwe uses a range of other nations’ currencies as legal tender, such as the US dollar, the Swiss franc, and the South African Rand. Government salaries are paid in foreign currency. The country hopes to use a regional South African currency by 2012, if the currency is created by then.

During a recent conference in Dailan, China, a bustling Chinese metropolis, the Zimbabwe Vice President suggested using the Chinese Yuan as the reserve currency, since Chinese companies buy most of the Zimbabwe”s exports.

How does this affect dollar and euro holders? If less people use dollars and euros, then demand for these currencies will go down, and when the demand for something goes down, the value of that item goes down. If you hold dollars or euros or gold or silver, monitor demand for these products, since lower demand, means lower value, and you may want to sell products with steep value declines. How do you sell the dollar or euro? Exchange them for another type of money.

Watching the value of your money is similar to watching the value of your investments. If you bought shares in XYZ company, you would occasionally check the news to see if the company continues to produce innovative products well-received by customers. If sales decline, you might sell the stock. Same goes for the items you use as money, if demand declines, use another money.

As for Zimbabwe, the local government shouldn’t adopt any one currency. It should switch to using real products as money, or if that idea is unrealistic, they should monitor the currencies available, and only use ones retaining their value. If the monopoly banks (aka central banks) of other countries know they are being watched, then they might create less of their currencies to preserve the value of their currencies.

Does anyone know which currencies are used by the government to pay employees?