The main charts have been updated. The Federal Reserve banking system issued 7.5 percent more dollars during the past 12 months. The annual change had been slowing since 2012, but now has quickened slightly. The lowest recent increase was 7.4 percent, but now has risen to 7.5 percent. See the bottom of the table below. The total dollars is 11.4 trillion, double what it was just seven years ago. 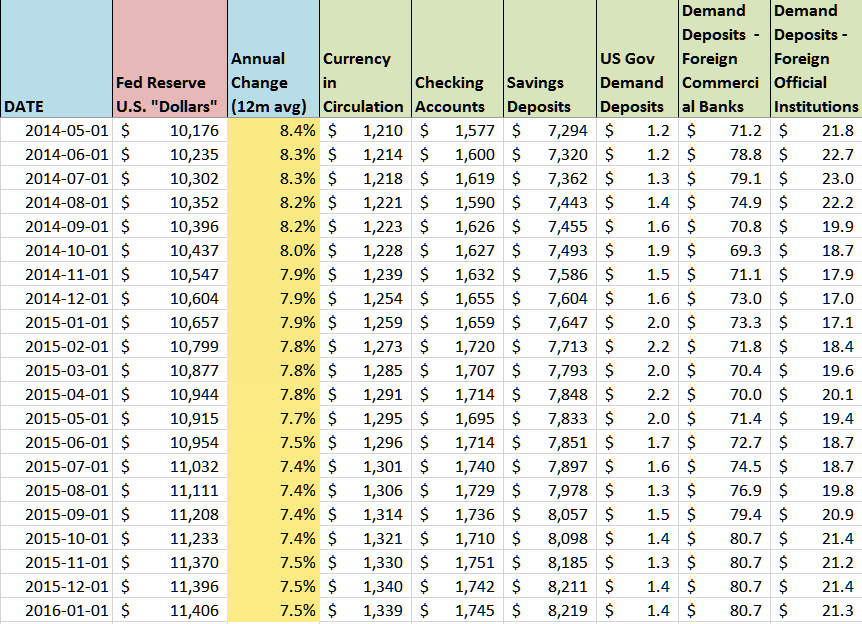 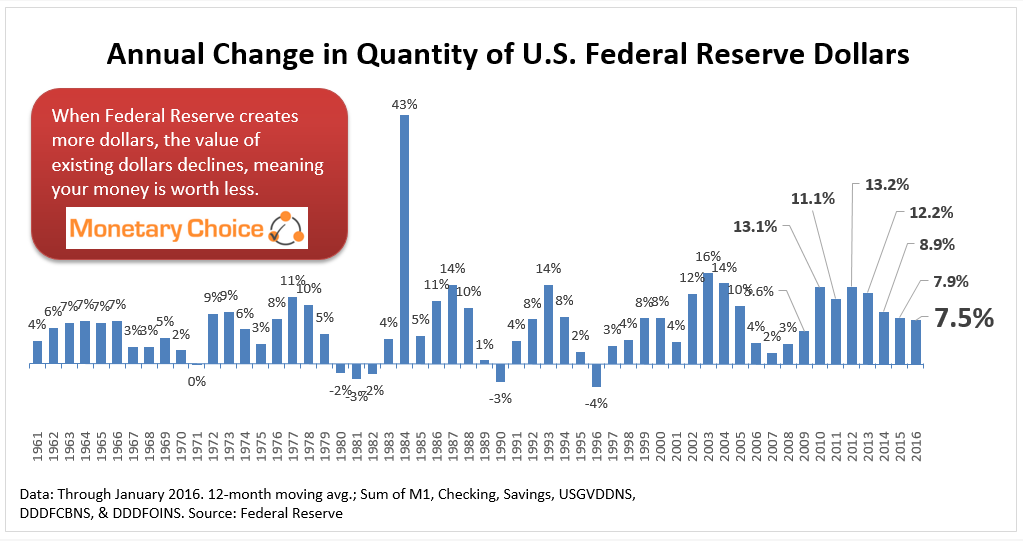 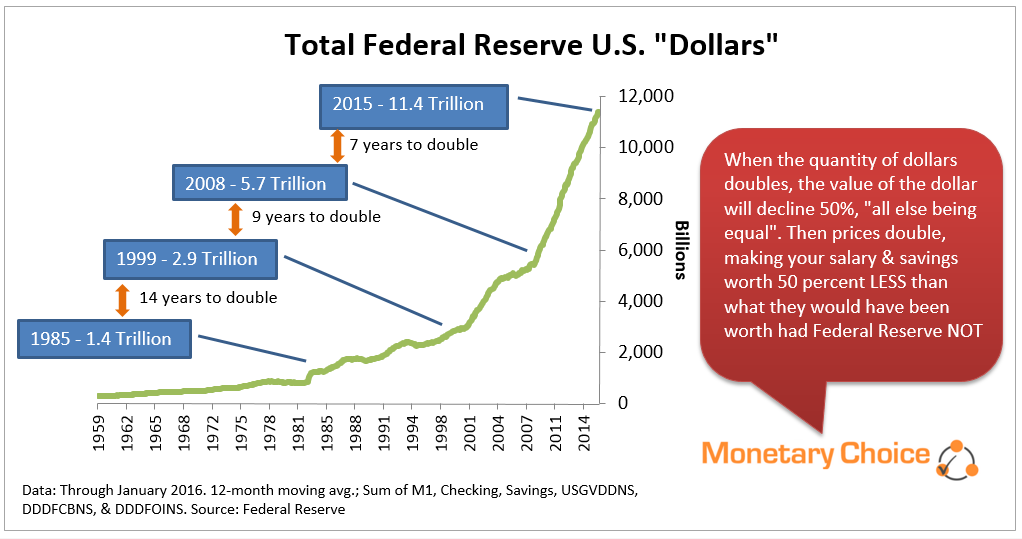 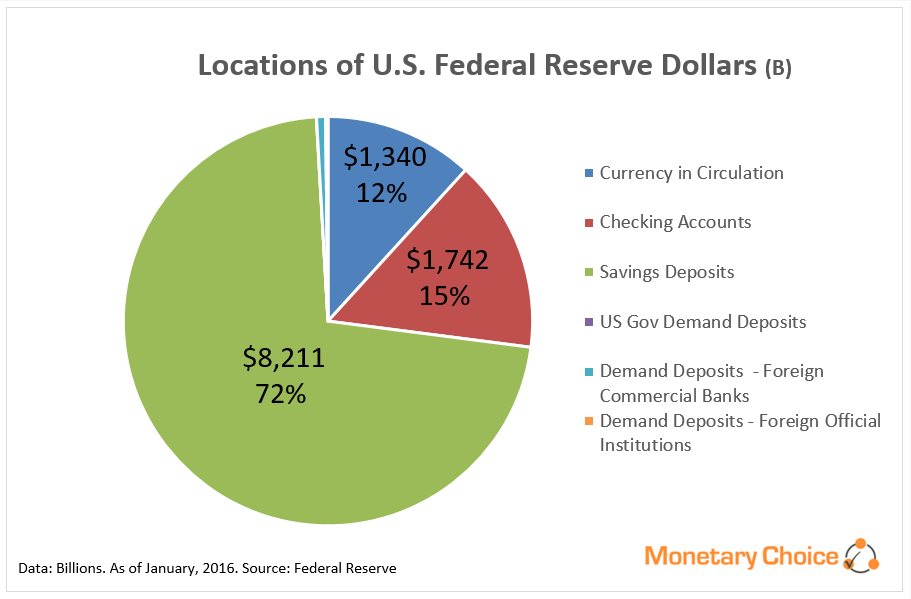 Read more about this relationship.

The annual U.S. inflation rate is now 7.5 percent, down from 7.9% last year and 9.5% the year before. FedRes is slowing the economy, so plan accordingly. Plus FedRes just increased the main interest rate, making loans more expensive, which also reduces economic activity. 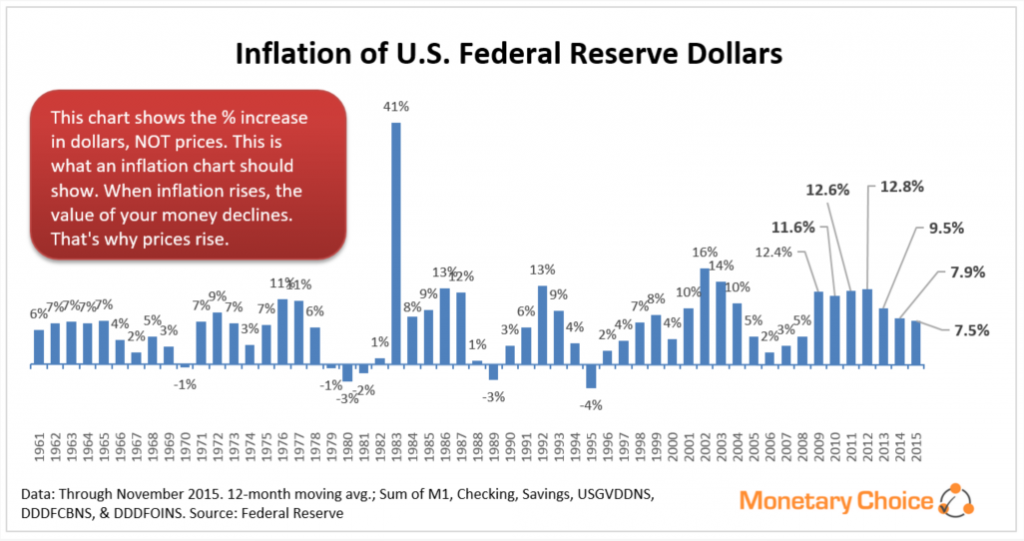 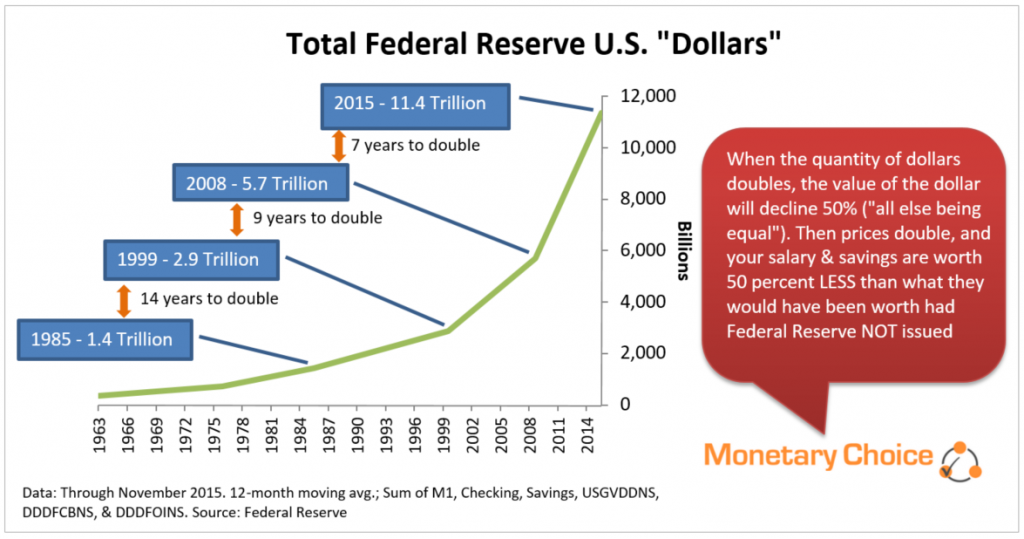 Since the truth is always the opposite of what’s in the big media, the lower inflation rate means your savings and your salary won’t lose value as fast as prior years. Though the value of your paycheck and your savings will go down 7.5 percent (all other things being equal).

Visit the charts page for supporting charts and tables. 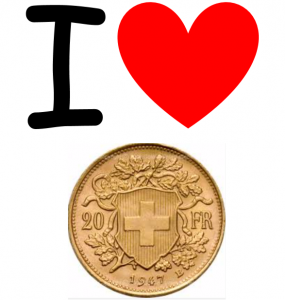 The Swiss central bank recently stopped devaluing their currency, which is great news for everyone but currency traders and people who live on the dole. However, this article and many others espouse the harmful myth that a strong franc hurts exporters, since their goods become more expensive in other currencies. This only applies to greedy exporters. The rational exporters will LOWER their prices since the franc is more valuable.

I MUST lower the Swiss Franc price for my watch to about 7,700 francs, which returns the REAL (not nominal) price to 10,000 ounces of oil. Then my sales will remain the same.

Any action by the Swiss central bank merely requires a price change. I must focus on the value of money, not the quantity of money. As I like to say, don’t count your money. Value it.

As of April, 2014, there are nine percent more Federal Reserve digits (dollars) than last year, This means that eventually prices will be nine percent higher than they should be and your salary and savings will be nine percent less. Federal Reserve officials will argue that prices must rise two percent each year as part of their propaganda. Common sense will tell you that since we get more efficient each year, it takes less time and energy to make things, and therefore prices should fall, not rise.

In case you think holding gold was becoming less popular, consider that the German central bank plans to bring back all of its gold stored in other countries, such as England, France and the USA.

German gold reserves, the second-largest in the world after the U.S., amounted to 3,387.1 tons as of Nov. 30, according to World Gold Council data. Germany’s Audit Court sparked a debate about the country’s gold reserves in 2012 when it called on the Bundesbank to take stock of its holdings abroad, saying their existence had never been verified. 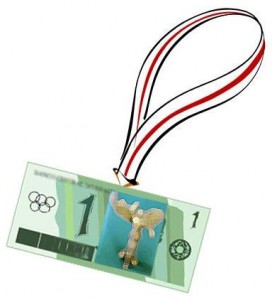 Comparing the value of one currency to another is like comparing two sinking ships. Most nation-state monopoly currencies lose value each year, some faster than others.

Plus, knowing that one dollar can buy X amount of yen or euros doesn’t apply to your grocery shopping today, especially since most of your groceries are produced in your home country.

It may be more helpful to know how the value of your local currency in a product you buy, and this would also resolve the sinking ships problem.

See the value of the dollar in wheat!

Banks can currently use a deposit as a means to create and lend out 20 to 30 times new money. They take in $10, then lend out $9, and that $9, if deposited at the bank, becomes the basis for new $8, etc. This is called fractional reserve banking. I call it fractional reserving fraud.

A proposed UK banking bill would outlaw this practice. Here’s a comment I made on a post about people’s attitudes about fractional reserving.

– every new loan creates new money and this new money devalues the original depositors money.
– depositors would earn a higher interest rate if banks couldn’t create money. Borrowers would bid up the interest rate on the fixed amount of money
– government banking insurance requires all taxpayers to support this fraudulent system, adding yet another financial penalty.

As Harry Browne pointed out, a depositor with 100 dollars in his account who expects to purchase two items for 50 dollars a piece could be outbid by someone offering 60 dollars for the item, and that someone borrowed the money that original person deposited. The bank funded the person’s competitor. That will make you think twice before giving your money to current banks!

For point number two, people also don’t realize they would earn a higher interest rate on their money if the bank could not create money. As many people always mention, bank credit would shrink without fractional reserving, but interest rates would rise and this would benefit savers. The NY times recently wrote an article about how low interest rates harm savers, especially retired individuals on fixed incomes.

The banking crooks created government bank deposit insurance to calm those who might be concerned about fractional reserving. Why worry about the bank lending out your money if the government is going to cover the deposit? People may or may not realize that they’re paying for the losses of other depositors.

One final point is that many people think it’s “neat” that banks can exist with only two percent reserves. They don’t realize the banks are stealing their purchasing power with every new loan.

If we can inform the public that fractional reserving devalues their paycheck and their savings, drives up prices, and reduces the interest paid on their savings, they will demand laws that prevent banks from creating new money.

People think paper currency has value because it used to have value when it was a receipt for silver. The top of the first image says “silver certificate”. Today, the paper currency says “Federal Reserve Note,” see below.