Note: Inflation is an increase in the quantity of money, not an increase in prices. Prices may increase because of inflation, because the money is worth less, but a price increase is not ‘inflation.” 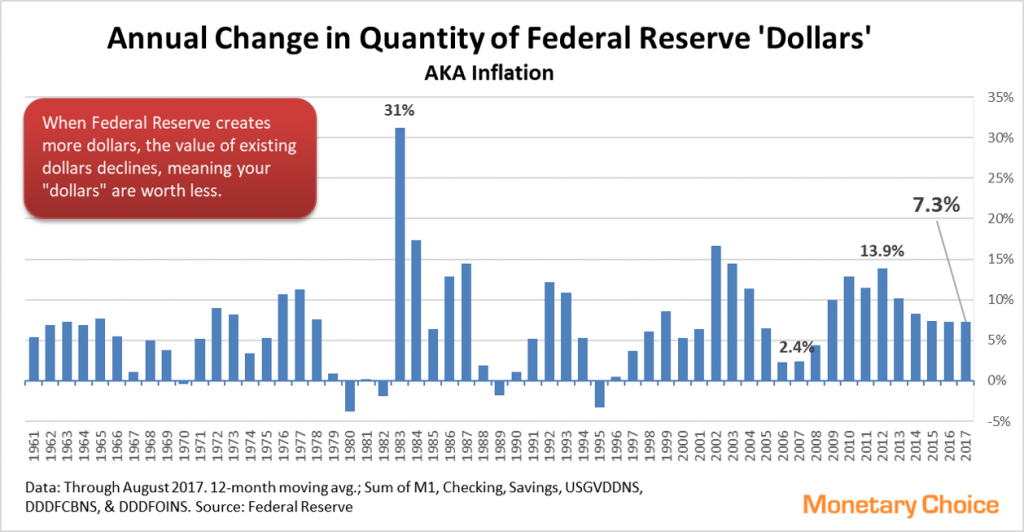 As you can see in the chart, usually Federal Reserve reduces the inflation rate after a series of high increases, but since 2014, the rate has remained level at about seven percent. Look for prices to continue to rise as the value of the Fed dollar falls.

At a 7.3% rate, this means your savings and salary will be worth 7.5 percent less than they would have been had the banks not created the dollars. What should you do? (1) Ask for a raise! (2) Don’t store your wealth in dollars!

Inflation affects the value of your money, whether the money is in a checking account or comes to you as earnings for work. Inflation means the increase in the quantity of dollars (though it’s mis-defined as an increase in prices). If the inflation rate is 10 percent for a year, than the value of your money will eventually be 10 percent less than it would have been if Federal Reserve banks had not issued more dollars (really promissory notes). In the rare but desired instances when the quantity of dollars decreases, that would be defined as deflation. This is also mis-reported as a negative.

The banks created dollars through the so-called loan process, which is actually the banks buying securities. Most of the new dollars are created so the U.S. government can fill its budget deficit.

If you look at the chart’s trend, you might be able to predict if economic activity will increase or decrease. When more dollars are available, more purchases will be made.

Also, economic activity will decrease in the future. Creating “dollars” merely moves activity from the future to the present, and from savers to borrowers.

It is not necessary to change the increase or decrease the quantity of dollars. The quantity can stay the same. Federal Reserve usually issues new dollars to fund government budget deficits and to help failing (mismanaged) banks and companies. Savers suffer since the value of their dollars goes towards the new dollars. Bankers and politicians prosper while savers suffer.

How do you protect yourself? Hold less Federal Reserve dollars and be wary of the stock market. 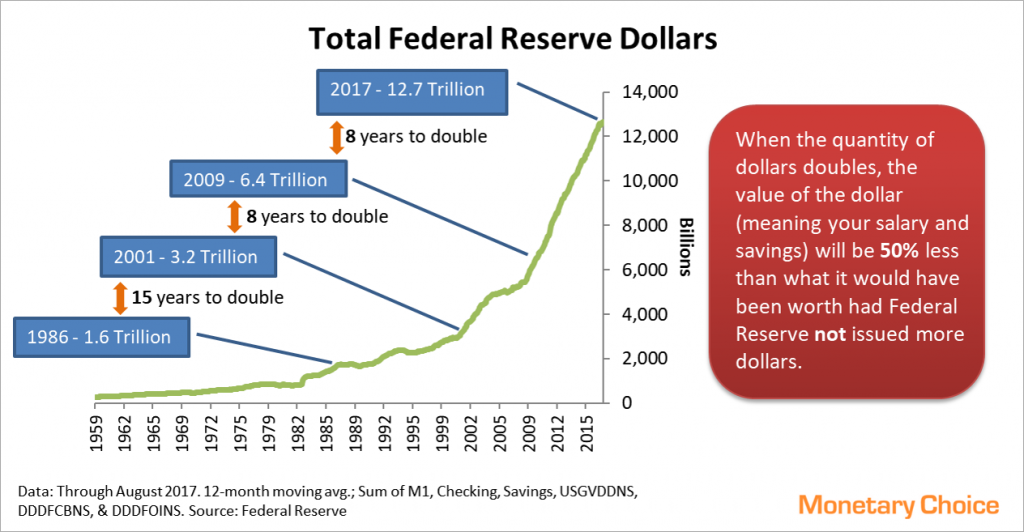 One of the most important financial elements is the number of Federal Reserve “dollars” in circulation and whether the quantity is rising or falling. Issuing new “dollars” lowers the value of existing dollars. Destroying “dollars” will increase the value of all other dollars.

Continue
For example, when the total quantity doubles, the original dollars become worth half as much as they would have been if the quantity had stayed the same. The new dollars derive their value from existing dollars. Here is the current quantity of Federal Reserve Dollars.

The amount of dollars doubled between 2009 and 2017. This means all the dollars in existence in 2009 are worth or will be worth half as much as they would have been had Federal Reserve not issued 6.3 trillion more dollars.

Note the real cause for the new dollars is that the U.S. administration requests these dollars to fill it’s annual budget deficit. If the administration balanced its budget, many fewer dollars would be requested/created.

People use different ways to calculate the quantity of Federal Reserve U.S. dollars. At Monetary Choice, the inputs are:

The first three comprise 99 percent of the dollars: 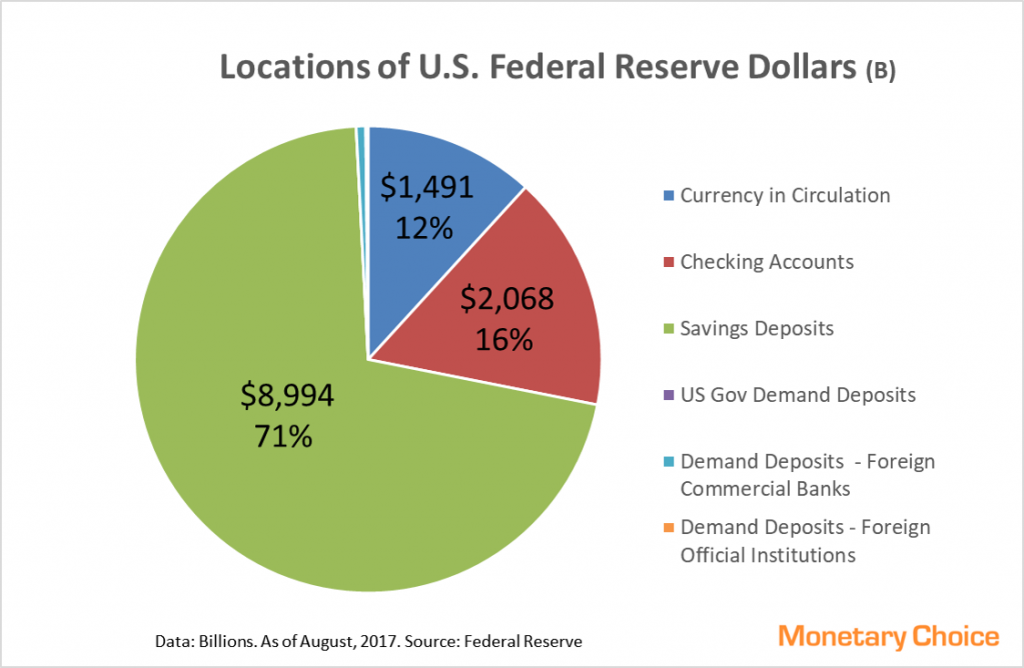 We include savings deposits because the money can be easily moved into a checking deposits from which it could be spent.

Data for the Charts

As noted above, usually Federal Reserve reduces the inflation rate after a series of high increases, but since 2014, the rate has remained level at about seven percent. Look for prices to continue to rise as the value of the Fed dollar falls. 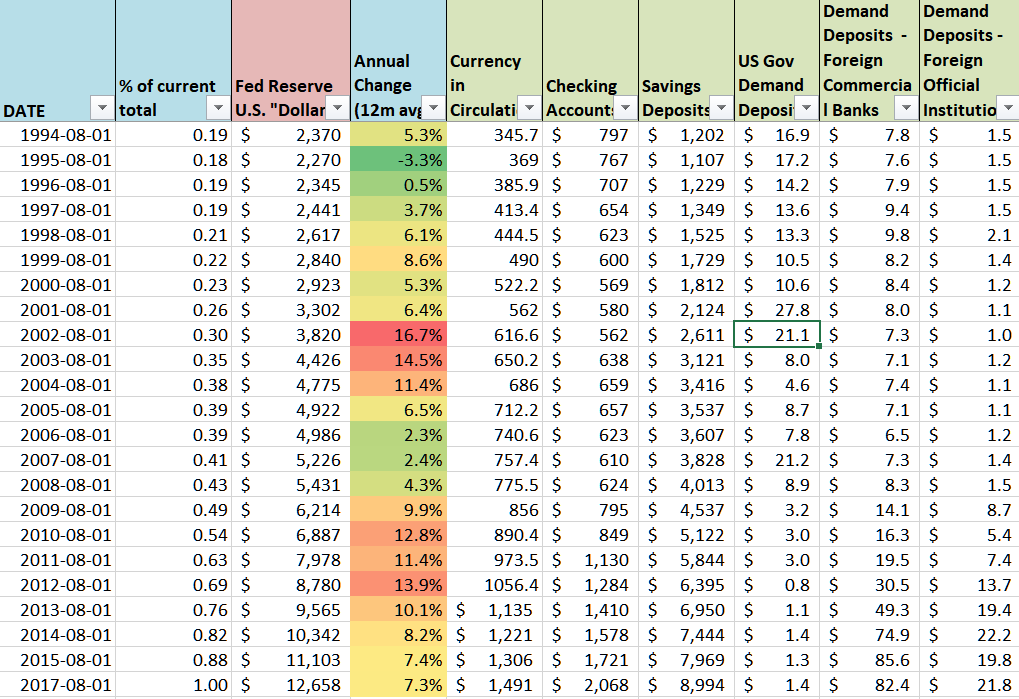