The cost of Amazon Prime, the two-day delivery program for Amazon, will soon rise when measured in U.S. dollars, but continues to fall if you store your wealth in gas, coffee, and most other products.

The dollar price of Amazon Prime will rise to $99, from the original $79 price set in 2005, a 25 percent increase. However, when measured in gallons of gas and pounds of coffee, the price or cost has declined over the past nine years, by 27 percent in gas and 53 percent in coffee.

The dollar price rose because there are twice as many dollars, which were created by banks to fund the U.S. federal government’s deficit and low-interest loans, all at the expense of savers. The value of the new dollars comes from all existing dollars. 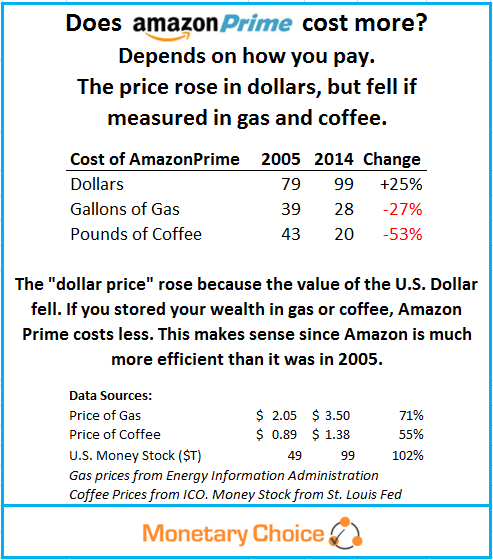 What would be the price of Amazon Prime if the banks, including Federal Reserve, had not doubled the number of dollars? …….. $49. Half the current higher price. Doubling the number of anything reduced their value by half compared to what their value would have been if the quantity had remained the same.