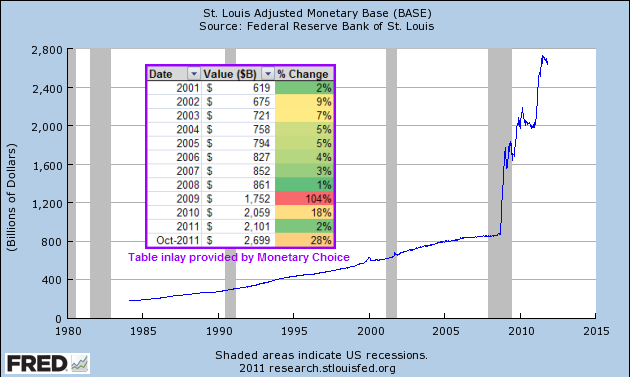 The vertical gray bars represent US recessions. 2011 doesn’t have a gray bar. Either recessions do not directly impact the money stock or the US is still in a recession. Or maybe 2008’s 104 percent increase relates to the recession, while the 2011 increase occurred because fewer nations, money funds, and people were lending money to the U.S., so Federal Reserve created dollars and lent them to the U.S. government.

If you’re not getting those new dollars, then you’re providing them, since the value of the new dollars comes from the value of all existing dollars. Imagine if you were filling a cupcake tray that has 12 spots and you ran out of batter before filling the final three. You would take batter from the other nine. Fed Reserve and it’s main client, the US Federal Government, and its main clients, military contractors, are eating your cake.