Your money will be worth 8.4 percent less than in should be in about a year or two because Federal Reserve banks have issued 8.4% more of their dollars/digits in the past year (see chart below). In other words, in the past 12 months, the quantity of Federal Reserve digits/dollars has increased by 8.4%. Thankfully, this is slightly down from the 8.5% annual increase last month, and down from the most recent high of 14.6% in June 2012, just two years ago. Any increase in digits/dollars will reduce the value of existing digits/dollars.

The total quantity of Federal Reserve digits (“dollars”) is now 102 trillion, up from 50 trillion just eight years ago. If you’re wondering why prices have doubled since then, this is the reason.

The table below shows the key metrics. The annual moving average was 10.2 percent one year ago and now is 8.3 percent. The total Federal Reserve digits is primarily composed of currency, checking deposits, and the whopping savings deposits (100 trillion is about the sum of 1,213 billion of currency, plus 1,619 billion of checking deposits, and 7,297 billion of savings deposits). In May, surprisingly, the total dollars/digits went down 0.1 percent. The bankers and their government benefactors had some mercy. 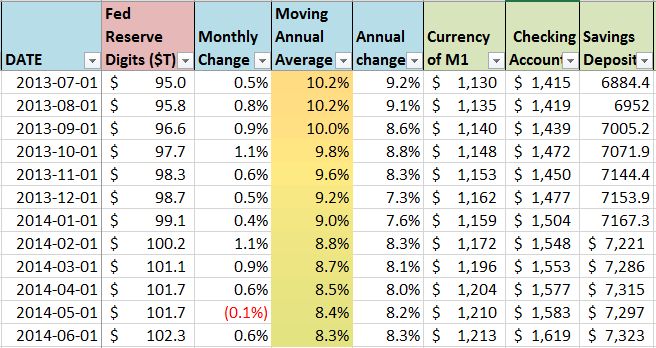