The quantity of Federal Reserve “dollars” increased 8.0% as of October, 2014, compared with last year, down from the most recent annual increase of 14.6% in June, 2012, just two years ago. [See chart below.]

The bad news is prices will eventually be 8.0 percent higher than they would have been if Federal Reserve had not created these new “dollars.” Another way to say this is that your salary and savings will be worth 8.0 percent less at some point. This also means the stock market will rise more slowly.

The good news is the annual increases continue to fall compared to prior months. I guess this what “tapering” means. This is good news because more dollars means each dollar is worth less, and when dollars are worth less, merchants raise their prices.

The quantity of Federal Reserve dollars is now at an all-time high of 104.5 trillion, about double the 2007 amount of 52 trillion. The original 52 trillion “dollars” from 2007 will soon be worth half as much as they were in 2007 because the new dollars, issued since 2007, derived their value from the existing dollars. [See chart below.] 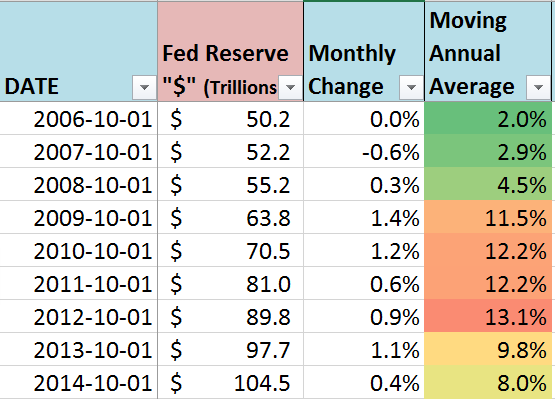