The value of the Federal Reserve Dollar is partially based on the quantity of Federal Reserve Dollars. More dollars means each individual dollar will be worth less. Between 2008 and 2011, Federal Reserve increased the base quantity of dollars by 2.5 times. This includes physical dollar and coins and money stored by banks at Federal Reserve. Banks can use this money to create new money through loans. This money indirectly says how much more money could be created, and new money will take value from your money, leading to higher prices.  Eventually each dollar could be worth about 2.5 times less, meaning your salary will be 2.5 times less, unless you negotiate a 250% raise.

The chart below shows the monetary base of dollars since 1985 and the percentage increases. 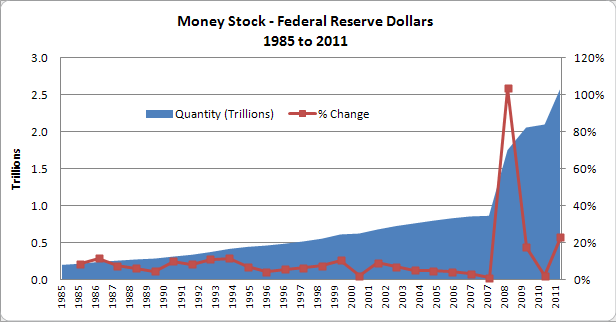 Courtesy of ShadowStats.com, here is the monetary base since 1918. In the early 1920s and late 1930s, Federal Reserve reduced the money stock.