Most news stories cite the value of the Federal Reserve dollar in other currencies, such as the yen or euro. A story will say the dollar rose against the euro. Since other currencies mostly fall in value, this compares one sinking ship to another. Also, no one eats currencies or uses them to produce things.

Currency traders may want to compare currency values, but most people want to know how much the dollar can buy or is worth in food, household goods, and other items. To see the value of the dollar in the real world, it’s helpful to calculate its value against a real commodity people use every day such as wheat. 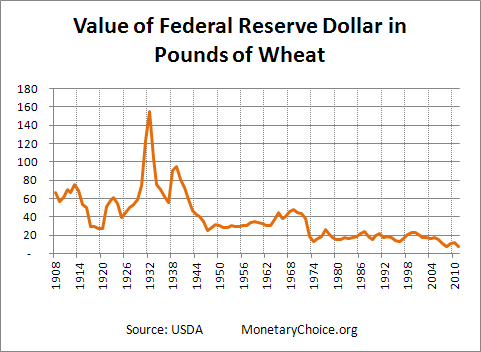 As stated, the 2010, the dollar was worth 12 pounds of wheat and now is worth eight pounds, a loss of 4 pounds.

Where did the four pounds of wheat go? They were given to the people who receive new Federal Reserve dollars, such as the government, and its beneficiaries, and also to people who received loans. Both groups were able to buy wheat with the new money before the value of the dollar fell.

Now since the value of the dollar has fallen, the price of wheat in dollars has risen:

Learn how new dollars take your wealth and how you can protect yourself from this loss. 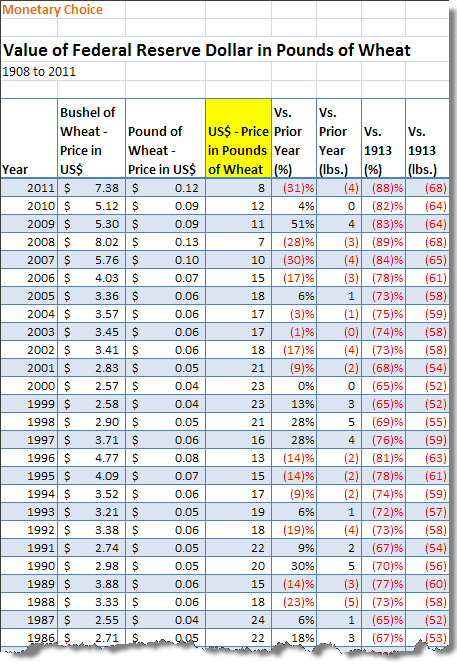