The salary of U.S. senators is about 65 percent less than it was in 1998 when measured in raw materials. Senators earn more dollars, but those dollars have less purchasing power. This is primarily because Federal Reserve issued 230 percent more dollars during the past 14 years. Senators should keep this in mind as they consider a bill to audit the Federal Reserve. Similar legislation passed in the House.

In 1998, senators made $136,700 and this could buy about 137 “baskets” of raw materials. The basket is based on the Rogers International Commodities Index of 38 items such as oil, wheat, copper and coffee. Senators now make $174,000, a 27 percent increase in dollars, but this amount is only worth 48 baskets of raw materials, a 65 percent decrease. If we focus exclusively on gas, a senate salary used to be worth 126,000 gallons of gas, but now is worth 50,000 gallons of gas.

For senators to earn the same value they did in 1998, their salaries would need to be about $500,000, or about four times more. This is not surprising since the price of gas rose four times as well.[1] 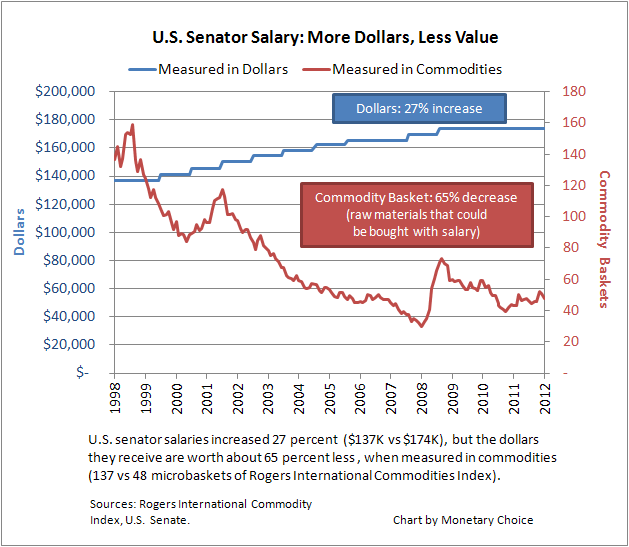 Federal Reserve initially issued most of those new dollars during the housing bubble, then for the corporate hand-outs, and now for government deficit financing. Another $600 billion was announced recently – a seven percent increase that could devalue the dollar, and each senator’s salary, another seven percent. 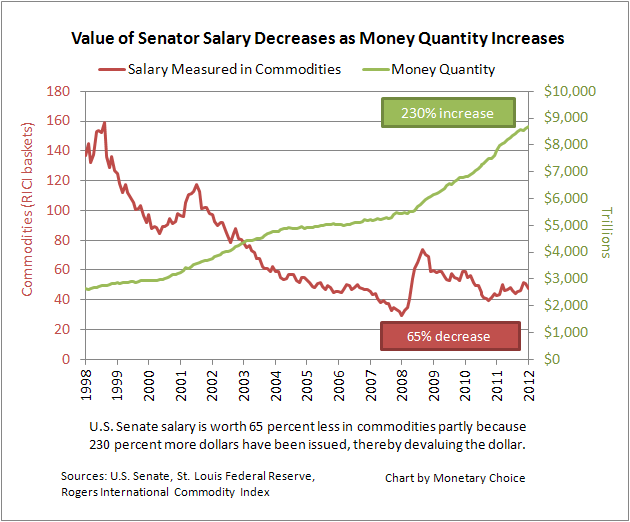 The senate did not raise their salaries during the past four years, likely because of the U.S. recession. Yet, they could send a strong message about inflation to employers across the country by raising their senate salary to keep pace with inflation, as measured with a commodity basket. Hopefully business owners will provide increases to their employees. This would not be a raise in value, just a raise in dollars.

With million-dollar net worths, many senators may disregard the real, lower value of their salary. However, the real value of their savings accounts has declined as well. Their constituents definitely care about the devalued dollar especially when they visit the gas pump or grocery store – something they will do many times before the November election.

Federal Reserve might be less inclined to issue more dollars if it was fully audited. The Senate has the opportunity to do this by passing the Federal Reserve Transparency Act of 2011, S. 202. The bill would allow a review of three things: agreements with foreign central banks and governments, monetary policy decisions, and Federal Open Market Committee transactions.

Exposing these decisions and transactions to public oversight would likely reduce the numbers of dollars issued, thereby preserving the value of the dollar. For example, Federal Reserve does not immediately reveal the banks and companies that receive loans in order to avoid embarrassing these entities and having their customers seek alternatives. With a prompt public audit, these companies might seek assistance elsewhere, possibly from new investors, thereby removing the need for Federal Reserve to create more dollars.

Audit opponents rarely mention how Federal Reserve has decimated the value of the dollar and all salaries based on the dollar. Had the senate audited Federal Reserve 14 years ago, senators might still be earning a salary that could buy as much as it did back then. Instead they take home a salary that buys about 60 percent less. A complete, annual audit would likely stem or reverse this decline.